With the first ever auction in Cricket, cheerleaders and Businessmen, I thought that no seasons of Indian Premier League could rival the first season viz-a-viz drama. But just the second season of Indian Premier League has proved me wrong.
First we saw Flintoff and Pietersen becoming the highest paid IPL Players. Then to everybody's surprise we saw Mortaza being snapped up for 0.6 Million USD. The Clubs paid these prices, when there was a Global Economic Crisis all around the world and pink slips are a norm in all the companies. I believed all these drama would be over with the auctions and focus would shift back to Cricket and Economics (Sponshorships)
Sadly, I was wrong. Lahore Happened. And everybody (including our very own Jacob Oram) started raising their concerns about the security. Even before that crisis settled down, Indian Home Minister Chidambaram joined the fray by dropping a bombshell about the security problems for conducting IPL during elections. Add to this, the recent controversy about the television rights of IPL, confusion reigns in the second season of Indian Premier League 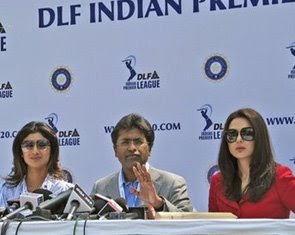 Thankfully, Lalit Modi has not given up hope and is now running pillar and post to various offices of Central and State Governments to get the necessary permission for running IPL. My hopes are not lost too. I still believe that the current schedule submitted by Lalit Modi would be accepted by Central Government.
But the biggest losers in all these drama are the fans like you & me. Delhi and Jaipur may not even play a single match in their home, while chennai super kings would be forced to conduct four of its home matches in an alien state. [News: Cricinfo]. Hopefully, Cricket in Season 2 matches the increased drama of this season and the next season is much more peaceful.
Modi! Bring the Cricket On!
Posted by Unknown at 23:13
Email ThisBlogThis!Share to TwitterShare to FacebookShare to Pinterest
Labels: Lalit Modi, Season 2

Robin,
what are your actual views about the IPL?
can i expect a post on your other blog, or should i call you?

@ Sajeev,
Nice to see you here.. Other Blog is more for expressing myself, while this one is because of my passion for Chennai Super Kings.. I believe IPL is a great concept and believe that this is a better business model of cricket existing than the international cricket model.. [So more chances that this model would flourish than the other model]