These are not 'just sports matches'. They are something more. Each of these matches resemble the battle between ancient warriors fighting for their pride. These sports rivalries add that extra element, essential for the success of professional leagues, drawing  new fans to the game. Some games even owe their popularity to the sports rivalries[Chess - Bobby Fischer Vs Boris Spassky match]. Even Team Owners love sports rivalries because of the increased television ratings and increased attendance for those matches. 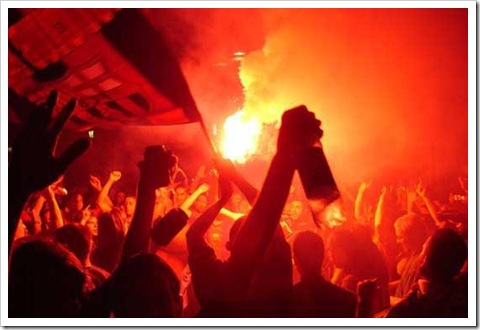 Sports Riots are Fun Too! :)

But it is the fans who benefit the most because we witness something special that cannot be described in words. These rivalries inspire folklore and the nail biting contests are retold for generations  eg. Javed Miandad's six off the last ball in Australasia Cup final, Boston Red Sox's comeback from 0-3 to win the seven game series. Fans who thinks sports rivalries are recent, arising from media hype, are sadly mistaken. Sports Rivalries have been in existence for around 1500 years[Nika Riots]. For IPL to become successful as everybody wants it to be, it is essential that each team create these rivalries.

So it is time we pick out our rivals. I could think of 3 teams that could be our rivals.

1. Mumbai Indians: How can we forget "lungi hatao pungi bajao" or "yendu gundu"? Also we could be picking out on the franchise with a huge financial muscle, thereby leading to a David Vs. Goliath fight.

2. Hyderabad Deccan Chargers: Wikipedia considers Proximity as the major cause of sports rivalry. Deccan Chargers satisfy the condition. Having the second best team, they are going to be the biggest roadblock on our march to the IPL crown.

Warning to Dhoni: You cannot, cannot afford to lose the matches against Bangalore Royal Challengers.

Posted by Unknown at 23:52
Email ThisBlogThis!Share to TwitterShare to FacebookShare to Pinterest
Labels: Rivals

Such rivalries are good for the media and the sponsors. However, they are bad for India's spirit of "unity in diversity."

Unlike the US, India is not a monolithic state; every state has a different language and culture. Also, we Indians tend to have lots of prejudices and stereotypes about people from different regions. Moreover, regional politicians don't miss any chance to play the "us vs them" card to further their own agendas. For example, the recent black-out imposed on Tamil channels in Karnataka and on Kannada channels in Tamil Nadu was stupid. Such actions only lead to more alienation from each other, based on regional lines.

In such an atmosphere, inter-state sports rivalries could turn ugly. What if the fans of one team, in an emotionally charged moment, use some kind of slur against another state, its language, lifestyle, culture or popular icons? I'm sure you can understand how the people from the other state would feel.

You have a blog that is probably going to be quite popular. You, therefore, have the power to influence the opinions of thousands of people, some of whom would be impressionable children who will be run the country in a few years' time. I request you to use your influence for the better, and promote the spirit of sportsmanship and "healthy" rivalry (based on performance, merit and humour), instead of regionalism, prejudices or chauvinism.

And by the way, sports riots are not fun for those innocents who lose their lives or suffer damage to their properties.

I am of Punjabi ethnicity, grew up in Delhi, married a Bengali girl, lived in Mumbai and am now living in Bangalore. But my favourite team right now is the Hyderabad team, because I really like its captain, VVS Laxman. But I would be fine with any team winning - in the end, what matter is the quality of cricket that I get to watch!

All the best to the Chennai Super Kings and their fans, and may the best team win!

Yeah.. Accept that there are downsides to rivalry.. But i dont think IPL as a format could survive without these rivalries..

Also rivalries in sports could divert the attention of people from political rivalries... For example, think how a cricket rivalry between Pakistan and India has done to heal the political wounds.. Also rivalries makes the fans look up to contest..

Regarding Sports riots, i dont think Indians are going to burn up a car or a bus because of the sports. So no issues in that..

Personally, i feel rivalry in IPL is good since the advantages(as listed in the blog post) override the disadvantages.,.