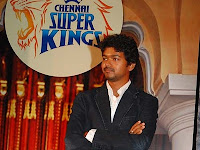 But not all seem to share my happiness. Chennai Online, on its editorial, has chided Chennai Super Kings for the disgrace it brought by bonding up with two Kollywood heartthrobs. They say bringing in Vijay shows the total lack of confidence. But their only valid point is that - 'With Dhoni being India's biggest ambassador, What is the need for another ambassador?'

But Dhoni being India's Brand ambassador(Generic) could not pep up the Tamil(Specific) crowds, especially Chennai-sts, while Vijay could do that. If supporting the team is based on the cricketer's brand, most of us would be supporting Mumbai Indians, since we all prefer Sachin over others. So the support base of Chennai Super Kings has to built on something else. By bringing on Vijay, Chennai Super Kings could assure Tamil people that they will always belong to the soil. Also Vijay provides Chennai Super Kings to come up with exciting promotions and advertisements that could create a buzz for Chennai Super Kings. Remember, even Chennai Super Stars of Indian Cricket League used a look-alike of Vijay for their promotion.

Posted by Unknown at 11:27
Email ThisBlogThis!Share to TwitterShare to FacebookShare to Pinterest
Labels: Brand Ambassadors

Since Twenty20 is flash and bang cricket, the aassumption is it will attract the younger crowd, who will equate it to a movie show.

By roping in Vijay, they are expecting that his fans will automatically watch the Chennai Super Kings matches.

BTW, one of my nominee Nayantara has been chosen as a mascot.:)

@ Ottayan,
Yeah.. it will be vijay's fans + people who will get attracted by ads with Vijay... Nayanthara being selected as star ambassador is great news.. :)

Vijay joins Chennai super kings most energy for all player