Inside Scoop of Dhoni's Purchase

Cricinfo has an inside scoop of why Chennai bought Dhoni for such a high price. Ajay S Shankar of Cricinfo calls it as a "decision that finally ended up shaking the game."
Chandrasekhar, selector for Chennai Super Kings, explains the reason for 1.5 Million USD purchase of Dhoni
"But for us, a player like that is priceless. He can create ripples with his game, and we can get our team to play around him," VB Chandrasekhar, former India cricketer and national selector, and who raised that last paddle for Chennai, said. "I have seen him transform from just someone from Jharkhand to what he is today." 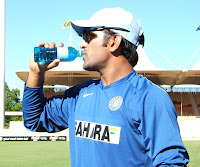 It also had an inside scoop on how Chennai did it. According to the report, Mumbai was the team that pushed Chennai to its brink, ultimately resulting in such a high price.

"Mumbai went one step further, and then Chennai did a strange thing. "We bid around the US$1.1 million to US$1.2 million mark, and as planned, tried to suggest with our body language that we would not go further," a source in Chennai's auction team said. "Reliance [Mumbai's owners] immediately went up for around US$1.3 million, and we put up US$1.5 million. We knew they couldn't match that as they had Sachin Tendulkar as their icon player, who would have to be paid 15% more, and their spending for just two names would have crossed US$3 million"
Posted by Unknown at 03:09
Email ThisBlogThis!Share to TwitterShare to FacebookShare to Pinterest
Labels: Bidding, Dhoni

Yeah.. We should have got Dinesh Karthick for Parthiv Patel.. I also was disappointed about that selection.. :)